We saw some surprisingly hot inflation numbers which hurt the financial markets and pushed rates to the highest levels of 2022. Let's walk through what happened and look into the week ahead. 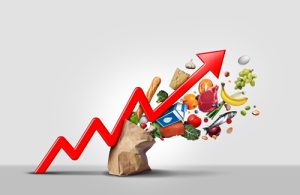 Last Tuesday the Consumer Price Index (CPI) was released, and it showed inflation remains high and a problem for consumers, the economy, and the Federal Reserve.

The headline CPI, which includes food and energy costs came in at a hot 8.3% year over year, higher than expectations of 8.1%. This number remains near a 40-year high despite getting some relief at the pump. The more closely watched Core CPI number, which removes food and energy, came in at 6.3%, a big month-over-month jump from 5.9% in July.

What caused Core CPI to jump so high? The housing component, which makes up 31% of CPI rose a lofty 0.7% for the month. This tells us that inflation will remain higher longer than we would like.

Stocks were rallying into the CPI release, sensing and "pricing" in a softer inflation number. Upon seeing the higher reading, the Dow had its 7th worst daily loss in history. This is because the high CPI means the Fed will continue to hike rates to slow demand, which sharply elevates recession fears.

Further proof of the concern is seeing the 2-year yield spike to a 15-year high at 3.80%, which remains well above the 10-year yield of 3.44%. This wide yield curve inversion portends a recession.

We all must remember that the Fed is raising rates to slow inflation, create unemployment, slow demand, and lower asset prices...all of these are good for long-term bonds and home loan rates. It is why we are seeing the 10-year yield rise as high as the 2-year.

There is a limit to how high long-term rates will go, and we could be nearing the limit.

The 10-year yield, while up slightly this week, remains below the 2022 peak seen in June. An important level to watch is 3.49%. If the 10-year yield moves above this important ceiling, rates will move up another level. If it can stay beneath this important marker, there is an opportunity to see that these will be the peaks for the year.

Bottom line: The Fed controls the overnight Fed Funds Rate and that rate is going higher next week. Longer dated Treasuries, like the 10-yr Note, control the Fed and right now we are seeing those long-term yields resist going higher because the global economy is sliding towards recession. It remains a great time to secure a home loan that is lower than the current rate of inflation.

The content of this website is intended for licensed third party originators or brokers only and may not be duplicated or dissemniated to the public. Carrington Mortgage Services is one of the leading wholesale mortgage lenders.